Posts from the ‘Deaf community’ Category

Five years later …. Rachel Sutton-Spence took her ideas from the first Signing Hands Across the Water festival in the USA first to South Africa (2014) with Michiko Kaneko and then to Brazil for a festival in 2016, with her colleague Fernanda Machado.

The format of this Brazilian festival also concentrated on performance, discussion and practical workshops, using the same format in both earlier events. This time the guest performers were from South Africa, Brazil, the USA, UK and Sweden. The festival sold out all the available workshops and events, nearly all deaf participants.

The 2016 festival website Festival de folclore surdo explains everything in fine detail (in Libras, the sign language of Brazil) but the film is better in conveying the excitement of those four days. There were familiar faces there from the 2012 festival – Peter Cook (USA), Richard Carter and Donna Williams (UK)

Martin Haswell’s film, Festival de Folklore Surdo: O filme condenses those four days right down into a few minutes. There is audio in Brazilian Portuguese and subtitles in English and French, so click the CC button and choose the language if you want to watch with subtitles. 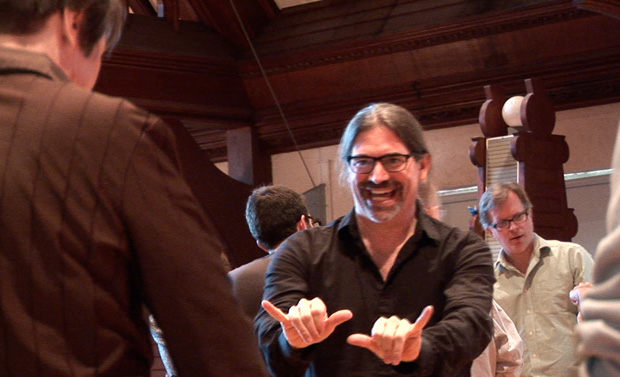 At the end of the workshop on Saturday the poets made videos of some of the attendees each with their own poems, and here are those videos – click the name to view each video.

The Heart of the Hydrogen Jukebox

After the visit of the Flying Words Project and Debbie Rennie to Swarthmore College last week, it’s worth mentioning Miriam Lerner and Don Feigel’s film ‘The Heart of the Hydrogen Jukebox’ which celebrates American Sign Language poetry and traces its development.  Kenny Lerner referred to the film and showed some clips from it in his own workshop on Saturday.

The film’s title comes from Allen Ginsberg’s poem ‘Howl‘, which Ginsberg performed at NTID in February 1984. The poet Patrick Graybill, who was in the audience, asked Ginsberg what he meant by the word ‘hydrogen’ in the line ‘listening to the crack of doom on the hydrogen jukebox’.  Peter Cook was in that audience, too.

If you’re in Seattle next month for the Seattle Deaf Film Festival 2012, then you can also watch ‘The Heart of the Hydrogen Jukebox’ there, as it’s been chosen to close the Festival on Sunday April 1st. The DVD is also available from NTID at Rochester Institute of Technology here.

Saturday’s workshop was well attended. Here’s New York based ASL poet Douglas Ridloff performing his work ‘Transients’ at the end of the session.

Richard Carter takes a bow after performing to a packed hall at Swarthmore College at the Saturday night performance, photo by Congwen Wang.

There are more photos on the Signing Hands Across the Water Facebook wall.

Sign language poets from Britain and America will come together and explore this rich and beautiful art form with members of College, the Deaf Community and visitors from the wider community. Signing Hands Across the Water will give College members and visitors to College a unique opportunity to discover sign language poetry in the United States and in the British deaf community where traditions, language and culture are different.  All events will be fully accessible in ASL and spoken English.

Signing Hands Across the Water

On March 16th – 18th 2012, Swarthmore College in Pennsylvania, USA celebrated sign language poetry. Sign language poets from Britain and America came together and explored this rich and beautiful art form with members of College, the Deaf Community and visitors from the wider community, to see

Signing Hands Across the Water gave College members and visitors to College a unique opportunity to discover sign language poetry in the United States and in the British deaf community where traditions, language and culture are different.  All events were fully accessible in ASL and spoken English.
The event was organised as part of the work of Rachel Sutton-Spence, Cornell Visiting Professor to Swarthmore for 2011-2012. Professor Sutton-Spence has worked on creative sign language for over 15 years, especially researching and promoting British Sign Language poetry (www.bristol.ac.uk/bslpoetryanthology).